The case for Analog Vs. Digital

It’s not only sound that is making the transition from 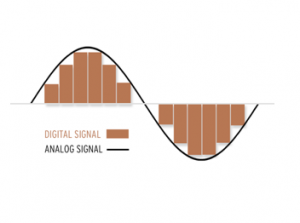 analog to digital. One can argue, and there definitely already exist many arguments that digital does triumph over analog, what that means for sound and music? Is there a difference between analog and digital sound, and if so, is the difference worthy enough to change your listening or playing styles?

This article will attempt to explain the difference between digital and analog sound.

Audio recordings come in two different types: audio and digital. Even with the newest and best technologies, digital equipment cannot reproduce and exact sound wave like an analog can. This is because analog records the exact wave of the sound, whereas digital records multiple samples of that same recording. There are pros and cons to both, and ultimately comes down to preference, but here is a brief breakdown of the science behind analog and digital.

The back to basics explanation of recording is that any recorded material is created by a microphone turning air pressures (which in this case is the sound) into an electrical analog signal. From this point on is where the analog and digital process of recording differs. Analog recordings’s signal flow are immediately imprinted onto a master tape via magnetisation or a master record.

Analog recordings record every sound, whereas with digital recordings, because there are thousands of samples, editing and mixing the recording can occur. Digital recordings take the same analog signal and convert it into a digital representation of the sound, which like all things digital is the classic series of numbers that digital software interprets. Once digitalised, the recording can be copied onto other medias, or edited using music programming software.

Once recorded, digital and audio recordings have varying degrees of bandwidth. Bandwidth is a unit used to describe the resolution, or quality of the audio recording. More technically, it is the resolution that the signal can carry out without degrading any of the information. Think of it like watching a video online, with shotty internet connection, it makes sense to have a lower resolution  on the video, rather than high quality. Music can be like that too, bandwidth can limit the music and the sound it reproduces. If you have a cheap pair of 10 pound headphones, one will not notice the difference, but with a 500 pound pair of headphones, you want a high bandwidth so you can hear the dynamic range of the music.

Then we come back to analog vs. digital. Analog recordings can be stretched to almost a unlimited quantity, whereas digital recordings do have their limits, even with the best equipment around.

The figure above, accurately portrays what difference between digital and analog signals and also evidently explains “chopped signals.” Digital signals, record the sound in steps, whereas an analog recording creates a smoother signal. That being said with analog signals there are often times tiny imperfections, as cracks, or pops in the midst of the recording. Digital recordings capture quick “snapshots” of the sound, correctly termed the “bit depth.” The higher the bit rate, the more snapshots are captured, creating a more accurate recording.

Everyone has their preference, but there is definitely a noticeable difference between analog and digital sound. Listening to a record creates a much difference effect than listening to an mp3. Beyond sound though, there is so much more to take into consideration. If you listen to music, there are the obvious advantages of having virtually any song at your fingertips while carrying around records would just be seen as a mental thing to do. Also, analog does degrade over time. Since the needle of a record player does make contact with the record each play, record will experience wear and tear. Sometimes though, and this is only my argument and potentially my attention-deficit disorder speaking, while listening to digital music I’m more prone to letting my mind wander and try to multi-task on other things. With analog though, if I have gone through the undeniably extra effort to set up and play a record, I will dedicate my headspace to the music and press pause on everything else going on in my life.

For those recording their own music. Recording digitally seems to make a lot more sense especially with all of the possibilities and opportunities within mixing and mastering, but you can see the idealised concept of having a raw, true to the bone, recording.

Ultimately, digital and analog music serves different purposes.  The convenience of being able to carry around thousands, if not millions of songs around with you comes at the price of high fidelity, but one can argue that if people were never introduced to audio recordings, they may never be able to tell the difference.