Ever wondered what actually goes on during a sound check? 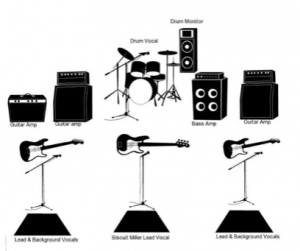 Most gloss over the technique and science involved when it comes to sound, but the work behind a sound engineer is not only fascinating, but an integral part of any concert.

For larger gigs, there are two sound engineers. There is a FOH (front of house) engineer, who controls and creates the sound that the audience will hear and a monitor engineer, who is in charge of mixing the monitors, which are the speakers that the band will hear of their own music.

Monitor engineering is sometimes seen as less important of a role than the FOH engineer, but in reality it is crucial in setting the stage, no pun intended, and for orchestrating a great sound from the band. If band members cannot hear themselves or their mates play, the sound could be distorted which could lead to a noticeable lack of confidence while playing. Monitor engineering provides a sense of security. If the band can hear their performance, than their performance improves because there are no doubts as to whether or not they are in tune together, following each other, etc.

Stage monitoring should provide the band with a clear sound of what they are playing, so all musicians can hear themselves and their bandmates. Each musician has different taste, for example, singers usually like to hear their own voice and one or two other lead instruments.

To most clearly explain what is involved in a monitor engineer’s role during gigs is to step-by-step go through a gig set up.

This is going to be an attempt to portray and explain the basic wiring of the stage that is involved with almost all gigs where a sound engineer is present.

To begin, the sound engineer, if lucky will have a specs sheet with a layout of the stage, the instruments to be played and the necessary equipment. This will show the placement of the instruments, musicians, and if necessary what other equipment is needed.

Wedges are the monitor speakers used during shows for the band. Following the stage plot, the engineer would begin by placing the wedges in their necessary locations. Usually, each musician will have their own wedge, with the lead vocal sometimes having two, and the drummer having his own “drum fill” which are speakers that have a range from subs to high frequencies. The wedges then needs to connect either to the patch bay, which essentially allows a connection from standardised cables and connectors to other pieces of equipment, or directly to the amps. The location of the amps really depends on the venue, but amps are what gives power to the speakers, without the amps, there is no sound.

Now is to check whether or not the monitors are working. By turning on the mixing desk and plugging a microphone directly into any of the channels, the sound should be connected to the monitors. By sending the channel signal to each monitor, the sound engineer would go to each monitor and make sure there is a level sound being produced. Once the signals are clear, it is a good idea to also find the MPG, or Maximum Potential Gain for each monitor. The MPG is pretty self explanatory, but it is the maximum amount of gain you can put on each monitor before feedback begins. You’ll need to do this again during the sound check, but it’s good to have a general idea for each monitor.

HPF, or High Pass Filter should be put on all of the monitors except the drum field. This is because we don’t want the monitors on stage to pick up any subs or bass which would add nothing more than noise onto the stage. One of the biggest challenges for monitor engineers is the amount of feedback that monitors can pick up, so juggling this whilst the band is playing and the FOH engineer is doing their own thing can prove rather difficult. Another way to combat this is by Equalising each monitor. EQing, in this case, involves balancing the frequencies in the monitor so the frequencies that DO NOT resonate well (cause feedback) are weakened by reducing their decibels (power.)
Mind, you, this has all taken place BEFORE the sound check, most likely before even setting up the instruments. At this point, the monitor engineer is almost ready to start mixing. If it hasn’t been done already, the drum kit will be all set with each pieces respective mic and channel as well as the amps, and vocal microphones needed for the show.

Live music really is a dynamic balance of sound, power, compatibility and vigilance. It isn’t only the band who creates the show, the sound engineers are just as important as the musicians themselves. In the next article you will be able to read about the infamous sound check, from both the monitor and FOH engineer’s point of view.